Stay-at-home, online learning and schedule switches: How one mother of special needs twins is adapting to the pandemic 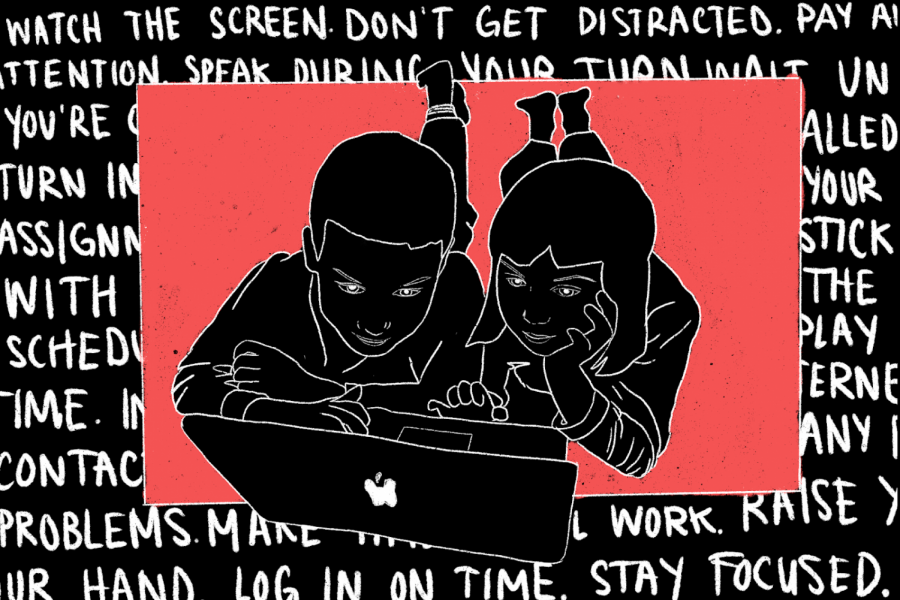 Maria Aguirre has twin 3-year-olds, Hector and Wilhelmina. Both have autism.

“We are tired by the end of the day,” Aguirre said. “And that tiredness rolls over to the next day, and the next and the next.”

Before the pandemic, she and her children went out almost every day. They’d head to the nature center, the beach or use their annual passes to the aquarium. For three hours each day, they’d head to LBUSD’s special education program.

When COVID-19 struck, all of this came to a screeching halt. No more outings. No more family visits. No more in-person classes.

Her kids were just about to start preschool, a symbolic moment for her children and the mark of Aguirre’s first real break in three years.

“Before COVID, it was great. They had finally started going to school. We had a routine. They knew their routine. They were doing really great. I was finally getting my little break, so happy,” Aguirre said. “[Now], there’s more meltdowns. There’s just overall more stress.”

Instead of a breath of relief, the fall semester represented another laundry list of responsibilities.

She explained that ABA therapy is “a scientific method to teach, essentially to break down skills into teachable parts in a way that increases the quality of life.”

This therapy is an essential part of long term skill-building and learning for Aguirre’s children. Without fully understanding what the coming semester will look like, she’ll have to roll with the punches.

“It’s very hard to plan for the future when I don’t have any information,” Aguirre said. “I don’t see why they’re waiting until a few weeks before school starts to plan things.”

Her first task— getting Hector and Wilhelmina into the same class. When LBUSD released class schedules for the coming school year, Aguirre learned that her children had been placed in different classes.

Each had a different teacher and a different set of assignments. With her husband working from home, she had no one to watch one child while the other was in class.

“How can they not realize that? They’re the same grade, they’re brother and sister,” Aguirre said. “They expected me to put up two different laptops and sit with them both at the exact same time.”

She spoke with the school and got the schedule fixed, but it was only one of the many hurdles Aguirre would have to face for the school year.

The challenges of online learning for kids on the autism spectrum

Challenges mounted. During the pandemic, her children’s behavioral therapist left the company she was working for, meaning Hector and Wilhelmina would be assigned a new therapist. This time, all sessions were to take place over Zoom.

“Transitions are really, really hard for my daughter. They regress,” Aguirre said. “She hadn’t done certain behaviors in a really long time. Even recently, they once again changed therapists on us and she went back to rocking when she’s frustrated.”

Wilhelmina also began asking to hold an object she once used for comfort, a toy chicken.

According to Los Angeles County’s Behavioral Health webpage, people with autism may exhibit body rocking, unusual attachment to objects and may get upset when routines change. The switch to online learning compounded with the change in therapists may have led to her daughter’s regression.

“The most ideal environment is the one that the child is going to be learning in,” Hardwick said. “We need to adjust our teaching to the fabric of their natural life.”

But the natural fabric of Aguirre’s life has changed during the pandemic. Shifting her family’s day-to-day activities, class schedules and therapists to accommodate the pandemic have all proved challenging.

“It’s harder for my kids, too. Because of something with autism, they have trouble making eye contact. Forcing them to look at the screen was extra hard for them,” she said.

Aguirre has come up with her own methods to get them to pay attention during class, usually involving some playful bribery with Goldfish crackers, but it’s not always so easy.

Hardwick said that she has spent months teaching her clients to adapt to the pandemic. Behaviors like wearing a mask, looking at a screen, washing hands and social distancing all require learning and patience.

“After the one-hour mark, you can just see them zoning out. They’re just tired,” Aguirre said. “After their online lessons, they would sometimes take naps, because the mental exhaustion, of just having to be on and pay attention, was a lot for them.”

Aguirre also has a new role to play– liaison to her children’s learning.

“It’s exhausting for me, too, because I have to sit there and make sure that they’re following along,” Aguirre said. “I have to understand what either the teacher or the therapist is trying to get them to do. I have to do it correctly, because they have their methods and if you don’t do it the right way, then they mislearn.”

“LBUSD is adapting,” a representative from LBUSD wrote in an email, stating that they’ve provided informational sessions for parents of students with disabilities, but Hardwick said that may not be enough.

“These students had all these services for a reason. To expect them to learn in this online format is really unfair to everyone, especially the parents,” Hardwick said.

She pointed out that, because autism is so unique from person to person, one can’t prescribe a blanket learning style to every student.

“I understand all of the challenges and liabilities,” Hardwick said. “But there’s a very small window for us to make a big difference in these peoples’ lives, who will no longer be children one day.”

Last month, the California Department of Public Health released guidelines for conducting in-person special education classes. Even if LBUSD moves forward with opening up in-person classes, Aguirre won’t necessarily be ready to send her kids back to school.

When she became a stay-at-home mom three years ago, Aguirre said it was so she could take full responsibility for her children’s health.

“I could go out and ask, go get babysitters and so forth,” she said. “But then there’s that fear like, ‘What if we get sick?’ so we’ve been managing it ourselves, to try and to try to avoid getting sick.”

Before the pandemic, Aguirre could lean on her family and friends for support.

“Special needs moms, we rely a lot on sending our kids to these schools, to these programs that are provided to us,” she said. “We get a lot of relief from visiting family and having friends around, that support network.”

She feels “cut off,” not only from resources but from the emotional support of her friends and family, especially since all get-togethers have been stalled for the foreseeable future.

“We’re at the tip of the iceberg of this thing,” Aguirre said. “I know that this is going to be going on for at least a year and I really do think it’s going to get harder.”

Even if there are difficulties on the horizon, she plans to take them in stride.

“People are fighting it. They want their kids to go to school. They want everything to be live and in-person the way it was before,” Aguirre said. “But it’s changed. Our life has changed, our futures.”

Prev Post: Separation anxiety and back to school: Facilitating a smooth return during COVID-19 Next Post: How one resident’s story can inspire a community